The most hated tax in agriculture, the estate tax, would be repealed as part of the tax reform package unveiled by President Trump in Indianapolis on Wednesday. Mega-farmer Kip Tom, who operates more than 20,000 acres in Indiana and Brazil, was chosen by the White House to attend the speech and to serve as a living example of the peril of the “death tax.” 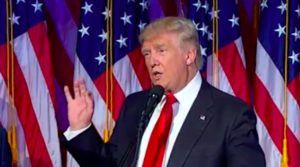 Tom, a seventh-generation farmer, says that under current estate tax law, he and his family may have to sell assets in order to transfer the operation to the next generation of family members. Tom Farms, organized as a limited liability company, is one of the largest farms in Indiana. Known as an innovative producer, Tom ran unsuccessfully for the GOP nomination for the U.S. House in 2016 and served on a Trump agricultural advisory committee. He was mentioned as a possible USDA appointee following Trump’s victory.

Trump said the estate tax is “a disaster for this country and a disaster for many small businesses and farmers. And we’re going to get rid of it.” The president called out to Tom in the crowd in Indianapolis, marveling at his family’s 187-year history in agriculture. “That’s a long time. But that great heritage could come to an end because of the death tax, or the estate tax, and could make it impossible for him to pass that legacy to his wonderful family. We’re not going to let that happen.”

Farm groups campaign perennially against the estate tax, which they say is a threat to the survival of the family farm because a farmer’s heirs might have to sell part, or all, of the farm to pay the tax. The National Cattlemen’s Beef Association applauded the proposal for “a full repeal of the onerous death tax.” It says the tax “and its associated costs adversely affect family-owned operations and the rural communities they support.”

Agriculture Secretary Sonny Perdue said the estate tax “can cause too many family farms to be broken up, undoing lifetimes of toil and preventing further generations from carrying on.” But in an essay at the Daily Yonder, Bryce Oates offered a different perspective, saying “only a tiny, tiny fraction of the very richest farmers will ever have to pay.” Some small-farm activists contend that beginning farmers will have a harder time finding land to operate if the tax code makes it easier for large farmers to keep their hold on land after they die.

USDA economists James Williamson and Siraj Bawa say that, as a result of tax-law revisions in 2001, 2010, and 2012, only a handful of farms and ranches are subject to the tax. “It is estimated that only 1.7% of farm estates would be required to file an estate tax return for the 2016 tax year. A much smaller share of estates (0.42%) is estimated to owe any federal estate tax,” they wrote, estimating that the total tax liability for 2016 would be $344 million.

Since 2001, Congress has increased the estate tax exemption, indexed it to inflation, lowered the highest marginal tax rate for gifts and estates, and let spouses share the exemption. “Consequently, the share of estates required to file a return or to pay taxes has fallen over the years,” said the economists. For this year, the individual exemption is roughly $5.5 million; it can be doubled for a married couple, so an estate worth $11 million would be exempt from the tax.

USDA data suggest that only the largest farms would be affected. The average U.S. farm is 442 acres, and the average value of farmland and farm buildings is $3,080 an acre, which means the average farm is worth about $1.4 million. In the Midwest, land values averaged $6,260 an acre at latest count, which would make the average farm there worth about $2.8 million. Bankers say land values are down from peaks reached during the 2006–2013 commodity boom. What’s more, farmers and ranchers often have other possessions, such as bank accounts and investments, that add to the size of their estates.

Beyond the estate tax, farm groups have other goals for tax reform. The National Cattlemen’s Beef Association said that “stepped-up basis, cash accounting, like-kind exchanges, cost recovery, and the deductibility of interest payments are just a handful of the provisions that allow agricultural producers to survive despite the many challenges we face, from market volatility and fluctuating input prices, to droughts, wildfires, and floods, to the challenge of generational transfers.”

Tom’s financial disclosure report from his congressional campaign “reveals his income was well into the millions,” said the Intercept. “But Tom isn’t just some small-time family farmer.”