When I was kid, my dad and uncle farmed a farm that was owned by one of my great-aunts. Everything else they farmed was in the typical rolling hills of eastern Nebraska, but this particular farm was in the bottoms of the nearby Elkhorn River valley. 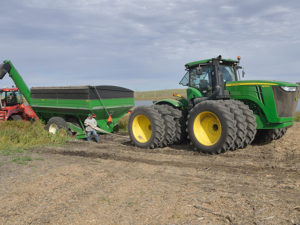 They farmed it for many decades and learned over the years to steer clear of certain parts of the fields during a wet growing season, especially in the spring. I can still clearly remember both of them telling me when I disked for them as a teenager: “The minute you feel the tractor pulling down, raise up the disk and get out of there.”

Because they managed to get a tractor stuck during the spring one time in the early 1980s so deep the entire back wheels of the tractor were buried in the fertile black bottom soil. I have gotten tractors stuck many times but never completely burying the back wheels.

After the field dried it took several chains (as well as largest tractor they could borrow from a neighbor) and finding a dry spot to pull from to remove the tractor from the earth. I vaguely remember this; it did make an impression on little kid.

For starters, Skjolaas said farmers need to select a proper towing device. Don’t just grab the first rope or chain you find in the shop and then use it. The towing device (rope, cable or chain) will be put under a significant force or tension.

If the device or even part of it, such as a hook, breaks the towing device suddenly becomes a dangerous projectile. Serious or disabling injuries and even death have occurred when a towing device failed; even cabs might not stop the force of the towing device, and the recoiling device could strike the operator.

Skjolaas said a long towing chain designed to support the towed load is recommended over nylon ropes or cables. A one-inch nylon rope has a stronger breaking strength than a cable or chain, and when a nylon rope breaks it snaps back to its point of attachment. Steel cables upon breaking will rebound in an unpredictable manner and wrap around any object in its path.

We had some nylon tow ropes for a while but they eventually broke and we never replaced them as they did not seem as strong as regular chains. We have a set of chains we pull with and another set we don’t use anymore as they are stretched out or have bolts holding them together.

More than one pulling vehicle may be required. In this situation, attach each vehicle with a separate towing device. Attaching vehicles in single file exerts too much power on the towing device between the second tractor and the stuck piece of machinery.

Skjolaas also recommended clearing the area of unnecessary bystanders for their own safety.

The entire University of Wisconsin Extension press release can be read at http://fyi.uwex.edu/…

Russ Quinn can be reached at russ.quinn@dtn.com